And it was probably one of the most creative uses of the Clavia Nord Modular G1 and Symbolic Sounds Kyma Capybara 320 combo so far!

And like always, you can listen to the whole performance here!


In this performance, the Clavia Nord Modular G1 was used as the only sound source, with the Symbolic Sounds Kyma Capybara 320 being used only as an effects processor.

But rather than using it in the same fashion as the previous times, this time, the effects are modulated by an envelope follower, which allowed for some very dynamic effects to be obtained!


Unfortunately, since I don't have my Capybara 320 here with me, I am unable to check whale exactly did I do when I was making my Symbolic Sounds Kyma patch...

But fortunately, I can still present the patches used for the Clavia Nord Modular G1, which follows next! 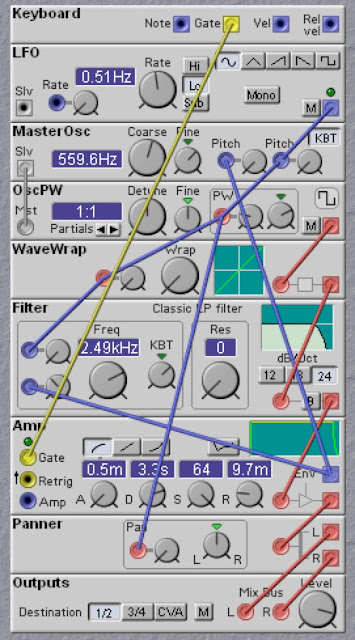 Rather than sticking to a single patch, I chose to use two different Clavia Nord Modular G1 patches for this performance, one that aims to give a nice polyphonic pad sound, while the other provides some nice groovy "blips and bleeps"! ;)


PadderF is a simple polyphonic pad patch, consisting of a single oscillator with PWM that is then processed by a wave wrapper and a filter, before the signal is panned.

However, to make things more interesting, the built in LFO modulates several parameters of the synth architecture, including the pitch and PW of the oscillator, the amount of wave wrapping, the filter cutoff as well as the panning!

And of course, the envelope doesn't only modulate the amplifier, but also the filter and even the pitch of the oscillator!


It might be far from being the most versatile patch, but since there was further processing going on with Kyma, I felt it should be able to provide really interesting sounds!

Also, since the Akai MIDIMix was not available to control the Clavia Nord Modular G1, as it was needed to control my Symbolic Sounds Kyma Capybara 320, I felt it was nicer to keep the patch as simple as possible, so that it was possible to have a good amount of control over it using the synth's own interface!


Furthermore, you were also able to listen to the 3DrumMachineF patch, which was used as a simple groove box, providing 3 different drum voices! 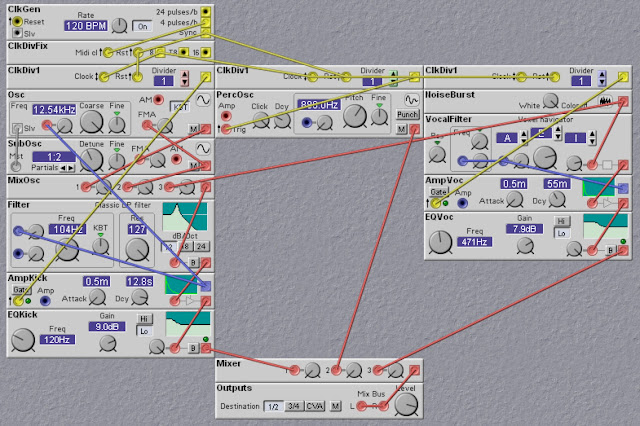 As you could see in the picture above, in this patch the different drum sounds are not triggered by a step sequencer, as happens with old x0x drum machines, but rather by a clock signal that is then processed by a clock divider!

With this solution, it is very easy to change your groove in realtime!
It might give you much more limited parameters, but since you are actually laying 3 patterns together, you can still obtain very interesting grooves this way, as I hope I was able to demonstrate during this performance!


As a final note, since there are no more notes I can give regarding my Kyma patch, I just mention that the grooves generated by the 3DrumMachineF had deeper impact than you would might actually imagine!

If you listen to the performance carefully, you'll notice that the percussive sounds played by this patch will have quite some impact in the effects, since those are dynamically controlled, which I feel ends up giving this performance a really nice touch!


So, I hope you enjoyed this performance as well and that you keep checking this blog for new posts regarding my previous performances, as there are still some pending and I'd really like to get them finished pretty soon! ;)
Publicada por Paulo Santos à(s) 21:27