CONCERT - Notes regarding the performance from yesterday!

First of all, I'm really sorry for informing all of you about my performances with such a short notice...

As you probably know, I used to play at electro-music.com before, but haven't done so for quite a while...


One of the reasons for that is that my studio has been quite messy, which has prevent me from actually using it as I should...

Unfortunately, I can't say I fixed that situation, but I felt it really was time for me to start playing again, even if that meant I had to improvise a setup in limited space.


So from now on I am going to start performing every tuesday and thursday from 22 to 23 GMT.

I feel this is also good for this blog as I have the opportunity to demonstrate some of the concepts I mention here in an actual musical performance, as I actually did this time!


Since it was a bit of a sudden decision, I didn't have much time to think about what setup to use...
So I decided to go for a very simple setup that ended up giving me the following signal chain:


It is a kind of setup that I used before, so it made quite some sense to just stick with it, since I didn't really have much time to rehearsal my performance...

If you listened to my performance, you probably noticed I used the Roland SH-101 a lot, together with my Electrix Repeater, which allowed me to make it sound like it is a polyphonic synth!

Rather than using the Electrix Repeater as an actual looper, I ended up using it as a very long delay, making use of only 1 of the 4 available looping tracks.

Unfortunately, my Electrix Repeater is a bit noise (I guess it didn't get the noise mod...), so I used one of the slots in the Clavia Nord Modular G1 as noise gate, with an added EQ to enhance the basses.

Those of you who have some experience with Clavia Nord Modulars will notice that I made use of the morph groups.
This was essencial in this patch since there are no stereo amplifier or stereo equalizer modules, which means this was the only way to control both at the same time (at least without using an external MIDI controller).


The other 3 slots of the Clavia Nord Modular G1 were used as sound sources, to provide me a polyphonic pad, a simple drum machine and even a noisy drone!


In the first slot I programmed a polyphonic sound, which I called MysticVoice since it made use of the amazing vocal filter Clavia made available in this series. 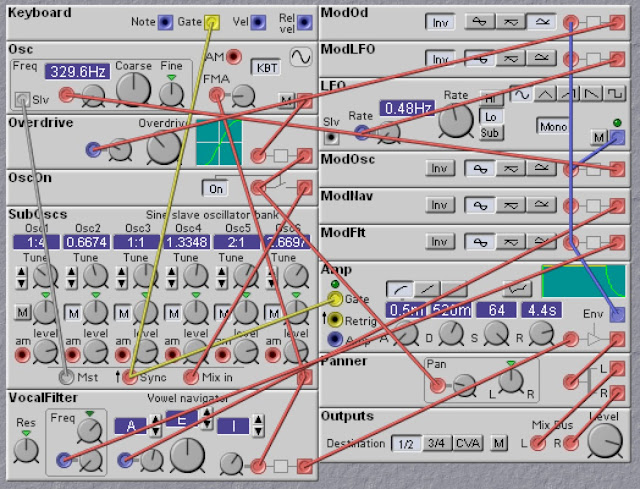 It's not a very complicated patch, but it's not easy to find a synth that features 7 oscillators plus a vocal filter in its architecture (I can't really remember of any other synth with these features...), so you get a nice unique sound out of it!


In the second slot, I programmed a simple drum machine patch, named 3DrumMachine, using the clock dividers as triggers to create a nice groove, in similar fashion to what I discussed in a previous post - https://synth-ing.blogspot.pt/2017/01/your-clavia-nord-modular-g1-as-drum.html!

The Clavia Nord Modular G1 was receiving clock from the Electrix Repeater, which justifies the top modules (I'm not sure why, but the clock seemed way too fast, so I had to use a fixed clock divider before I used the variable ones to crete the groove).

Like I mentioned in that previous post, I had to use the morph groups to get a reasonable range for the clock dividers, but using the whole panel, there was still some space to control the essencial parameters of the different drum sounds!

The channel in the middle is made up by the PercOsc module, which sounds pretty good and some times is all you need.

The channel in the right was a more experimental drum sound, with a noise generator being processed by a vocal filter.
The result is far from a traditional drum sound, but I found it to sound quite interesting.


In the third slot, I created a noisy drone patch, named NoisyHold, which can be sounding all the time, or only when a key is played!

This is a pretty basic patch, consisting of a noise generator processed by a low pass filter with resonance.

What makes it interesting is the module I called "AudioThru", which is in fact an x-fade mixer module.
With this module, you are able to choose how much amount of the signal you want to let thru all the time!

Later in the concert, I let a bit of the signal go thru, creating a nice noisy drone, that would get stronger when the keys were pressed!

The sample & hold module also contributed a lot to add a nice motion to this noisy drone sound.


As you can see, it was a pretty simple setup I used, but it allowed me to perform for an hour!

The secret for that is really the Electrix Repeater, which makes it so easy to just noodle around with a mono synth and get it to sound really nice and deep!

And to compliment this noodling, the Clavia Nord Modular G1 was a perfect choice, as I could use it as a drum machine, as a polyphonic synth and as a noisy drone, always with great sound to it (and it even has inputs to mix the signal from the Electrix Repeater!).

Maybe it would have been a bit nicer sounding set if I had featured a reverb at the end of the chain (which I usually do, but this time I didn't...), or if I had used a more versatile machine than the Roland SH-101 as a mono synth, but all in all it was very fun to perform again and am definitely looking forward to tomorrow!


P.S. - I hope to get "Your Clavia Nord Modular G1 as a Drum Machine? - Part.2" done pretty soon! I know it has been some time since I published the first part, but don't worry, it is not forgotten!
Publicada por Paulo Santos à(s) 23:18